I loved this book as a child and read and re-read it many times.

The only part I didn't like was the ending, when the cat turned out to be just an ordinary cat. So I fixed that in the BryonySeries.

“Me-ow,” wailed the white cat at the back door. She pressed her little, pink nose against the glass, pleading to the house’s occupants for entrance.

Brian dropped his spoon into the cereal bowl, sloshing milk over the sides. He turned wheedling eyes on his mother, who refused to budge.

“For the hundredth time, no! We are not keeping that cat.”

“But Mom, it’s freezing outside. Now that Scooter’s gone….” Brian’s voice broke. “I mean, what if Scooter was cold and hungry and no one let him in?”

Nothing was there, except for Snowbell contentedly purring at her feet. Melissa touched her chin and her neck. They were whole, untouched, sound.

John still sat there, intently watching her, the same way Snowbell watched mice. Then she remembered what Snowbell did to mice.

Snowbell’s possessions were packed and waiting at the front door. Julie pushed Snowbell at Brian with such force he almost dropped her. Then she shoved Snowbell’s supply box onto the front porch. “Don’t ever ask me to watch your creepy cat again!”

Some trinket boxes were oval, but all had either fairy or animal-shaped knobs. One cat resembled Snowbell, for its fur was white; its staring eyes were blue; and its head cocked to one side.

“Brian,” she said, “does Snowbell ever stare at you, for no reason, I mean?”

“Snowbell’s torticollis stumps me,” the veterinarian said. “Her tests are normal, no infections or tumors. The only other possible cause is a past head trauma. Bring her back if you notice other symptoms, but otherwise, don’t worry. She seems to have adjusted to it.”

Angry scratches crisscrossed her left arm, from her shoulder to back of her hand. Snowbell jumped off her bed. Darned cat!

When I was very young, younger than five, I had a white plush/stuffed toy mother cat and three kittens that sat near the pillows on my unmade bed.

And then one day, they were gone.

My mother had thrown them away. She said the doctor told her to do it.

I didn't understand them it was because of my asthma, although that would not be officially diagnosed for at least another decade.

Now the other day, this arrived for me in the mail, a "just because" gift from Rebekah.

She is handmade and a perfect Snowbell, don't you think?

You may also enjoy this short story. 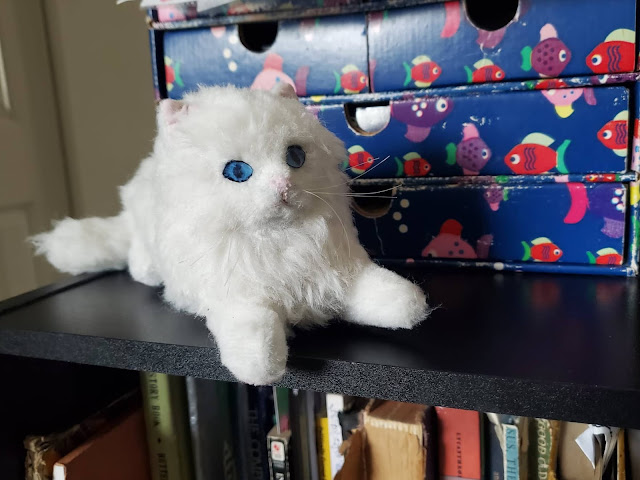