For those new to my blog, Ed Calkins is a former supervisor of mine when I worked in a newspaper distribution center with my family.

Ed is creative and dyslexic, which makes writing, which he loves to do, challenging. So he created an alter ego for himself, which (legally and with his permission), I fictionalized and wove into the plot my "drop of blood" young adult vampire trilogy.

I also dedicated Saturdays on my social media pages to all things Irish, including Ed. That first year, he wrote a series of posts about my Irish genealogy, which I compiled into a book and hosted a signing for him on Calkins Day 2018 (Ed's birthday).

Last year, my lone BryonySeries super fan suggested I write Ed's back story. I handed the task off to him. He said he'd "think about it."

Then one day, many months later, he blew up my email with drafts of chapters in progress, a sample of which I posted last week. The other day he sent me a review of the book he hasn't quite written yet.

BTW, "MOMI" stands for "Mistress of My Immortality."

At first, I was really excited. Who wouldn’t be?

Denise’s fans have made an understandable request, and Denise answered in an unpredictable way. There must be a back story of Ed Calkins, and that story must be told if human literature is to survive the next millennium.

The surprise of the century, doubly surprising as the century is only this year out of its teens, is that Denise has refused to write it! She asserts that the only way that back story will EVER be written is if the famed Steward himself writes it. Moreover, she has given me her blessing to do just that, instructing me to write whatever I wish about that.

Imaging my pleasure! Finally, a book by Ed Calkins, about Ed Calkins, and for Ed Calkins, will grace the greatest works of the first trillion years of book writing! As the singular target audience for the literary endeavor, I can’t wait to read it.

So using my powers of gazing into the future, I read the book I’m to write from cover to cover in a single reading and…well; I’m not sure I like it.

Don’t get me wrong! I love the author and read everything he’s never finished writing, but as I read Ruthless, I’m wondering if what I like about his work is that he doesn’t write any of it.

Maybe my expectations were to high. It's no worse…really no different that any cheap drugstore novel that passes for a best seller to a public without any literary tastes at all.

Maybe I should consider the enormous difficulty in the subject matter and how Denise, no doubt concerned about her reputation, tossed this task to me like a hot potato hand grenade.

Even with all her talents, it took her five years, three volumes, and countless characters to make a narrow point about Ed Calkins as a cautionary tale to young women that if Ed Calkins asks you to marry him, he might only do so once.

Perhaps the best way forward is for Ed Calkins, the reader, to list his objections and then reflect on what the writer might say in his defense.

The most annoying flaw about Ruthless is that it has other characters grabbing the spotlight, taking up countless pages, and otherwise trying to behave as if they might be as interesting as the ruthless Steward of Tara!

Why are lesser characters even mentioned? Nobody wants to hear about an gun slinging alcoholic poet dominatrix, love-sick leprechaun with a steady hand and a time machine, scantily clothed merrows wanting respect, or even a comical were goat trying to bump of his best friend by impersonate Satan. I want to read about Ed Calkins! Its not that I think Ed Calkins is the center of the universe, its that I think he should be.
Still, we should consider the author's point of view. If there aren’t other characters, how will Hollywood add the sex and violence when they finally produce the movie? Just finding the right actor handsome enough to play the lead is more than the industry’s pool of talent can accomplish. Can you think of anyone? I can’t either.

Then there’s the other glaring flaw: the plot is too predictable. Not ever reader would find this to be true. Some lesser readers will have their hands full just trying to understand the plot, but the target audience is just too smart not to see the shocking twists and turns from a mile away.

Maybe it asks too much of an author to always surprise himself with what he’s going to write, but great works come from high standards. To alleviate this flaw, I should consider either getting really drunk before writing Ruthless or getting the same before reading it. How disappointing that neither will work, or, if it did work, I was too drunk to write, read, or remember.

My last criticism of the book is a matter of word count. One would expect that a book about Ed Calkins would have the words ‘Ed Calkins’ in its pages by the thousands, if not hundreds of thousands of times. The same could be said for the word "ruthless."

If the author wasn’t so preoccupied with plot twists and other word wasting action, this expectation might have been met. I don’t want to give too much away for any (which to come think of it, is everyone besides Ed Calkins), who might not have read the book, so I won’t give an exact number. Let me say that the words "Ed Calkins" appear in the hundreds and "ruthless" even fewer than that.
I realize that future readers of Ruthless will undoubtably take a different tract when reviewing this disappointing work. Low standards, a lack of literary good taste, and fear of being the target of an amusing limerick will serve as a deterrent for honest criticism.

I should point out that even I never said I don’t like the book. Like any Olympian, standing on the podium awaiting a silver metal, I wished for gold.

Maybe I do like the book. Maybe I need to swallow my disappointment and get on with writing it, lest I miss my own 2021 deadline.

Maybe I need you to tell me that I do like the book but am too ruthless to realize it.

Maybe you need to read the book so you can tell me if I like it. 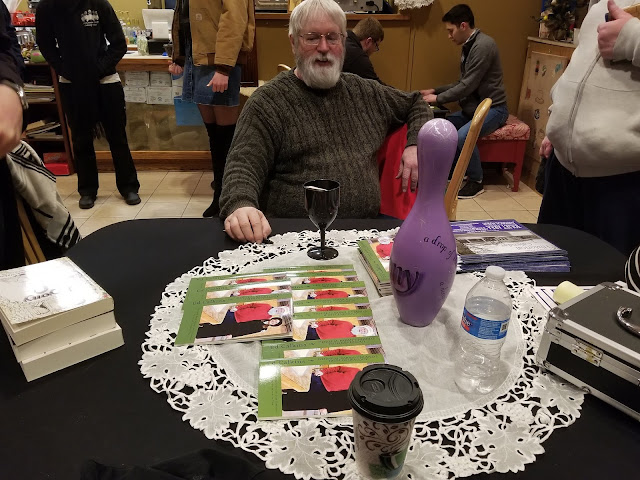