Although much is written recently about"down time" and treating weekend like "mini vacations," many people feel they work more and longer hours than people in the past did.

I'm not certain people actually do.

My father, for example, even before he owned his own business, had many nights where he came home for dinner, showered, and went right back out to a meeting.

On weekends, after perhaps a Saturday morning (or longer) at the office, especially after he did own the firm, he did yard work or other projects around the house. In fact, he had enough yard work to spend both Saturday and Sunday afternoon with it.

On many Sundays, he also served as a reader (St. Bernard's, Joliet).

If one goes back further than that, even the literature for children from the nineteenth and early twentieth century doesn't show adults with lots of down time.

In fact, my mother said my dad once told her (and she wasn't happy about it), that even when his mother was sitting, she was always doing something (i.e. darning socks, etc). Think of the days when the family sat in the parlor in the evenings, polishing boots or engaged in needlework while someone read.

So the fact many of us find work extending into evenings and weekends is nothing new.

What's new, or fairly new-ish, is that we've forgotten to pause.

And maybe even admire.

An example: In the late 1850s, the French painter Jean-François Millet created an oil painting of two weary peasants in a potato field, heads bowed in prayer.

In many Catholic countries, the ringing of the church bells reminded people to stop their activities and pray the Angelus. When I attended St. Bernard's as a young child, we actually took a break during the school day to pray this prayer, with one of the Sisters reciting the first part and the students saying the response.

The water cooler cliche may have been less about quenching thirst and catching up on gossip.

Our jobs may no longer fit neatly into the post-World War II model of forty hours a week with weekends off for fun and leisure.

But (hopefully) all of us have the power to stop and breathe.

Heck, even the medical literature says we should get up and move around every hour or so to cut the risk of diabetes and heart disease (for those of us at desk jobs).

It's not always possible, I know. And, for me, I also like the relaxing feeling of finally stopping after running mental (or writing) marathons.

We don't need to duck under a tree and sleep. Slow and steady may indeed run the race.

But we can still take time for a drink of water and to bask. 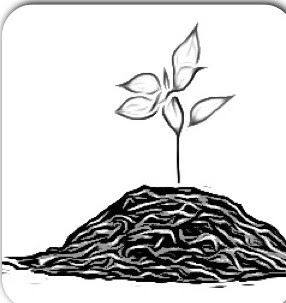 Illustration by Christopher Gleason for "Staked!" Follow him at www.artworkbytopher.com.