Where Do You Struggle? (And Seeking Some Advice Here)

Accompanying any project or pursuit, including writing, are parts that are easy, difficult, boring, exciting.

The thrill of putting those scenes to Word document, developing those characters, creating structure, all of these produced an exhilaration that I can't seem to match today.

I mistakenly thought that was my favorite part of creating a book.

Now that I'm a few books into the thing, I'm finding I really enjoy editing. By now, the story has form and shaping and polishing is easier and more rewarding than the early, messy stages.

I have forgotten how to do "early" and "messy" over the nine years it took me to write Before The Blood, the sequel the BryonySeries "drop of blood" trilogy (Bryony, Visage, and Staked!).

And I'm really struggling with this.

I have two novels going at once, two very different novels in terms of characters, plotting, and structure.

I'm in touch with the characters.

I then spent about five years writing it (a year per installment).

So for most of that time, I worked from a well-developed outline.

During this time, I also write six books for The Adventures of Cornell Dyer series.

But I also worked from outlines that Timothy Baran had created. I was simply the ghostwriter.

So I'm not certain if I need to step back and create more detailed outlines or step up and just do some free flowing writing with these stories and let them develop themselves. 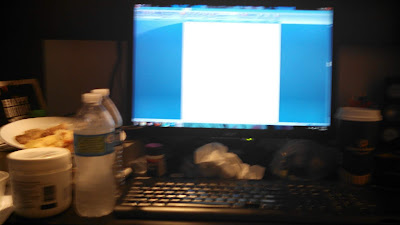