In all the years I've known Ed Calkins (the real Ed and the pretend Ed), we've actually never sat and had a real conversation.

When he was my supervisor for one of my paper routes, we obviously had verbal interaction.

And when I was writing him into the ByonySeries "drop of blood" trilogy, I often interviewed him by phone.

But a real conversation? Never, not in the more than ten years since I met him.

We remedied that on President's Day, since I was off work.

Over a very long lunch (several hours), we caught up on life, work, the BryonySeries and Ruthless, his first novel, which tells the back story of the pretend Ed Calkins and will be part of the BryonySeries.

Since he's adding some of my characters to the storytelling, he was concerned about remaining true to my vision of them. I reassured him that because Ed Calkins (in all forms) is an unreliable narrator, he could do what we wanted with the characters.

"I was hoping you'd say that," Ed smiled with relief.

When we parted, he asked for another lunch meeting, six months out, to keep him on track and accountable regarding his novel, so we set one for July.

My WriteOn Joliet co-leader Tom Hernandez says our adult critique group always honors the effort. Honoring the effort doesn't mean getting a shiny gold star simply because one writes something of dubious quality.

For some writers, that's as far as they will write, and that's OK.

Other writers want to keep develop their writing a bit more, and that's OK, too.

Others want to polish forever (and then polish some more), and that's OK, too.

We honor that effort every step of the way.

Not with a gold star.

But with honest, thoughtful feedback, encouragement, and suggestions.

In short, we respond to the piece.

Unless one is keeping a journal, writers want to be heard.

In any form of communication, one speaks, the other listens. And vice versa.

But sometimes writing feels like the proverbial tree in the forest. When we sit - alone - in our space, we wonder if anyone will ever "hear?"

The best gift you can give a writer is to hear - and then to respond.

That's how one honors the effort. That's how you "hear" the writer.

In Ed's case, as a writer who'd long ago given up on writing due to all the obstacles (computer crashes, terrible dyslexia, and a bad case of the scatterbrain), I've kept WriteOn Joliet's vision by providing opportunities for him to be known as a writer.

I've written him into my series.

I've given him a spot on my blog and published a series of those blogs into a book.

And I'm "helping" him with his first novel, which is connected to my series.

"Helping" means answering questions, providing encouragement, and then guiding him through the editing and publishing process.

But Ed still has to do the hard work of writing and overcoming the obstacles that impede that work - especially since he wants a finished book and copies in hand for Calkins Day 2021!

He's setting his own deadlines. I believe he will fulfill them.

Pictured are the real Ed Calkins and the real Bertrand The Mouse. Both are characters in the BryonySeries.

Bertrand already has his own series going, six books so far. 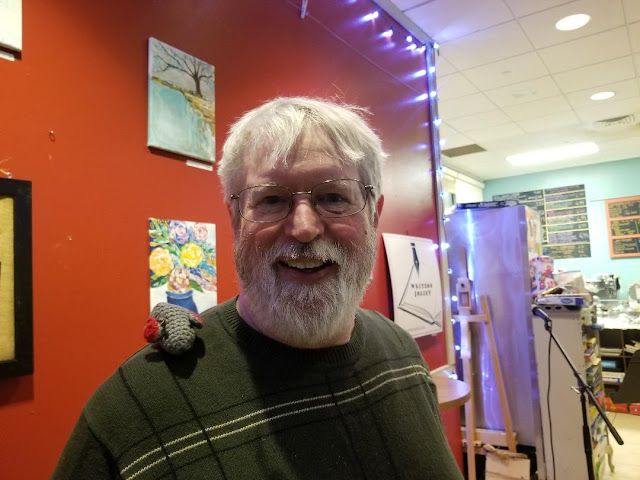