How the Real Ed Calkins Became a Fictional Vampire

It was timing, actually.

Two years ago, Ed Calkins and I worked in the same distribution center. He was a supervisor, and I was a newspaper carrier. Ed was always planning something to make working a seven-day job in the middle of the night more lighthearted. One of those “things” was his annual Ed Calkins day parade in honor of his birthday.

The parade was a simple one. Ed would ride a palette jack and toss candy to the carriers. Each year Ed had the parade, I missed it by coming too late to see it (It’s a VERY short parade).

One year, Ed kept pestering me about starting a newsletter for his imaginary kingdom. He had assumed the persona of a “ruthless dictator” dubbed as the “Steward of Tara” and demanded some “media” coverage. So, after missing yet another parade, I presented him with a big red bow and a choice of birthday presents: a monthly one-page newsletter or a bit role as a vampire in Bryony. Ed laughed and said, “Immortality, of course.” Thus, I began rewriting parts of the novel to make room for his character.

Ed’s character grows in plot importance in the three books that currently comprise the Bryony Series, but the fictional Ed Calkins resembles the real Ed Calkins in many ways except one: as a vampire, he is free to fully live the stories he weaves. 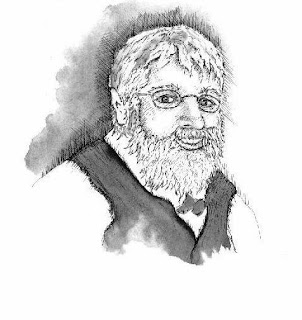