We all have different definitions of "sleeping in."

For some, starting a weekend before noon is unthinkable. For others, it's past the time they might rise for work.

For me, it's any time after the sun is up. In fact, a part of me feels I've lost a significant chunk of the day if I waken after the sun does.

Before my maternal grandmother died the summer I turned seven, I spent quite a bit of time at her Chicago home. My grandfather had to be out the door by four o'clock in the morning for work, so she rose around three to prepare breakfast for him, and I invariably rose with her.

The memories are vivid: sitting at the table in the tiny kitchen that used to be a porch, gazing out the little window at my right into darkness, a silent contrast to her bustling in the lit room. I can smell the sizzling bacon and the coffee; I can hear the hiss of the percolator.

After my grandfather left, my grandmother and I headed back to bed for a couple hours.

As a middle school student and a teen, I suffered from insomnia. I often woke abruptly around one in the morning, never drifting back to sleep (i.e. a short nap) until five or so, a problem when one began school at seven-thirty!

I passed those hours reading (middle school) or reading and listening to music (high school).

For the first decade or so of motherhood, I was a nursing mom, so waking up one or more times at night was simply part of normal routine.

Those days merged into my single motherhood days shortly after my youngest turned two. And thus began a dozen years of rising before midnight to deliver newspapers, a job that grew from being responsible for ninety-nine papers to several thousand per night.

I met my second husband during that first year and moved to his childhood home in Channahon during my second year. He and I started our church's first and only youth ministry and remodeled outbuildings on our property to host meetings and events for up to fifteen youth of various ages.

He also set up a coffee pot with a timer in the game room since our kitchen was tiny and had no extra room for a coffee pot. Each afternoon, I'd prepare and schedule the coffee for the next day.

Every morning, shortly after awakening I took the dog outside (by morning, I mean shortly after midnight). He'd wander behind the buildings while I unlocked the door, the warm scent of freshly brewed coffee greeting me, especially welcome on chilly winter mornings.

Then Scooter and I would head back to the house - him for a snack and a nap, me up the metal ladder to my attic office to check email, social media, and slowly wake up. About an hour later, I'd wake up the kids so they could do chores, grab a snack, etc., while I did some housework and packed our lunches.

Yes, lunches. Breakfast was after the route.

The routine today is similar: I wake up in the dark, head downstairs to feed the cats and make coffee, and back upstairs to check email and schedule social media with darkness around me. Gradually, the sun rises and so does my level of alertness.

The biggest decision I make during those initial moments is which coffee pod to choose (Daniel buys a variety of dark roast) and which mug to to choose (as I've been gifted with many from generous family and friends). Here is today's choice. 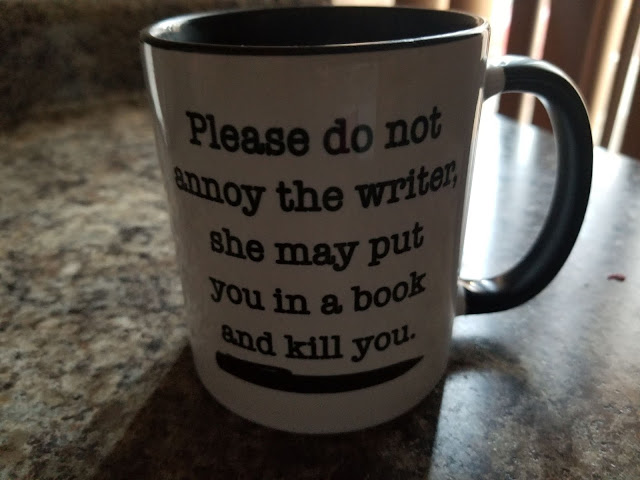